Click the link below to read the October 1, 2012 preschool newsletter.

“Be a yardstick of quality.  Some people aren’t used to an environment where excellence is expected.”  Steve Jobs

EXCELLENCE IS EXPECTED IN HAY SPRINGS!

Reflect back three years ago.  Hay Springs Schools were not achieving well academically.  We had a large number of students that were not proficient on State Assessment tests, our school district did not meet AYP (Adequate Yearly Progress), and perhaps worse, the State of Nebraska placed us on the “Persistently Lowest Achieving Schools” list – the bottom 5% of all schools in the State.  Overall, we were a failing school district academically.

Two years ago our school was taken off the “Persistently Lowest Achieving Schools” list.  Because of our high academic success we are not close to being placed on the list again.

ACT Test: If your child plans to attend a four-year college after high School students must take the ACT.  This test reflects the achievement of our graduates over time and is an indication of the extent to which our students are prepared for college-level work.  The ACT measures English, mathematics, reading and science.  Last year’s graduating class and this years senior class are both substantially over the State average.  I would note that most schools only test the few students that plan to attend college.  In Hay Springs we make an effort to test every student.

We can attribute our academic success to our outstanding teaching staff, hard working students that come to school well rested and prepared for class, a solid curriculum and a supportive Board of Education.

In the last week we have sent home individual student’s State Assessment Test Scores.  Read them over, ask your child’s teacher for clarification, and work with your child if there are areas that are low.

As a community we should be proud of our hard working students, supportive parents, and diligent staff.  We are all working towards improved learning and successful students.

There is no better place for your child than Hay Springs Public Schools.

Several students and Mrs. Olson have met the 26 mile run/walk goal of the Read/Run marathon.  Students also have until January to read 26 books or earn 26 accelerated reader points. Mrs. Olson encourages these students to keep going and continue to run and/or walk each morning. There are several more participants who are still working to reach their 26 mile goal. 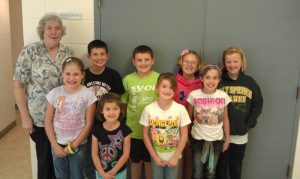 See You at the Pole is a student-led, student-initiated movement of prayer that revolves around students praying together on the third Wednesday of September, usually before school and usually at the school’s flagpole. It involves students in elementary schools, middle/junior high schools, high schools, and colleges/ universities all over the world. Hay Springs students participated in this national day. Prayer was led by Fellowship of Christian Athletes member Austin Weyers.

On Thursday, September 20, 2012, Trooper Chuck talked to the Middle School and High School about sexting, bullying, cyber bullying, child pornography, and ways to stop it.  There are many cases in the Panhandle of Nebraska.

Trooper Chuck taught us about some of the dangers of bullying and cyber bullying.  We learned about how important it is and that many teenagers commit suicide because of bullying.  About 4% of all suicides are caused by bullying.  Teenage female suicides have gone up by 70% in the past 5 years.  Cyber bullying is when a person uses technology to bully another person.

One of the videos was about a boy, who was told to “go home and shoot yourself and nobody would miss you.”  Then the boy went home and killed himself.

Bullying isn’t just physical, it can also be emotional.  Some examples of bullying are: excluding a person from a group, calling them names, talking about people behind their backs, & physically hurting them.  Bullying is the main cause of suicidal thoughts all throughout America.  We also learned that girls have a higher rate of suicide than guys.

Sexting is when someone takes a picture of someone nude/partially nude or a picture of a sexual act and sends it to others. There are many young adults and teens that are now sexting.

It really got us thinking about bullying when he mentioned that a girl named, Jessica killed herself because people were bullying her.  She took a picture of herself naked and sent it to her boyfriend.  When they broke up he sent it to all of his buddies who passed the picture on to their buddies.  Many people teased (bullied) her about the picture, causing her to become depressed.  She didn’t do anything.  She thought that when she graduated it would be over.  One day, her mother went into her room and saw her hanging.  This is an example of sexting.

Trooper Chuck said that if someone reported a picture of a naked or partially naked person under the age of 18, the person in possession can be put in jail for child pornography.

Trooper Chuck also said that the police can go into your phone records to find evidence of sexting or bullying.  If a person has a picture of a guy/gal that is under the age of 18 can get be arrested. This will make the chances of getting hired very difficult, because it is a felony.

What do you do if you get a nude/partially nude or a picture of a sexual act?

What can you do if you are being bullied?

What if someone else is being bullied?

Don’t join in the bullying.

Stand up for them.

Obsessing (talking about or posting it) about death.

Telling people that they feel they don’t have a right to live.

Saying that they want to kill themselves.

IN ALL CASES TELL A TRUSTED ADULT!!!

Click the link below to read the September 24, 2012 preschool newsletter.

Beginning October 1st, middle school and high school students will have a “grab-n-go” option for breakfast. The cost will be the same but menu items will be able to be taken to their lockers and eaten when convenient for the student.

Students in grades one through eleven will be taking NWEA MAPS the beginning of October.  We are hoping to finish our NWEA Maps assessments prior to parent-teacher conferences so you can receive those results at conferences.  If you do not or if you have questions please contact Mrs. Marx after conferences.

Actual test dates have not been set at this time; however, your child’s teacher should notify them of an impending test.  You can help your child by remembering it is important for him/her to get a good night’s sleep before testing and to eat a good breakfast.  Also remind your child that these tests are important and encourage him/her to do their best.

This year’s homecoming games will be October 5th against Banner County. The volleyball game will begin at 5 PM and the football game at 7 PM. The week leading up to the game will be filled with fun and games.

The week starts off on Monday with Toga Day as the Dress up theme. Coronation will be held at 3:30 in the High School auditorium. After afternoon practices at 7 PM there will be a Fear Factor/Anything Goes competition for the classes held at the football field.

Tuesday’s dress up theme is Duct Tape. Students are already working on their Duct Tape costumes for the day. That evening’s event will be the annual Softball Game held at the city field starting around 7 PM.

Wednesday will be Flood Day. Students are coming dressed ready for an impending flood. Wednesday evening is Church and Homework Night. This year’s senior class is suggesting that everyone attend their regular Wednesday evening activities and then head home and get caught up on their homework.

Thursday is the annual Hat and Jersey Day. These will be the outfits for several fun activities. Around 3:30 there will be a Pep Rally downtown in front of Security First Bank and everyone in the area is invited to attend. Later that evening, there will be an evening activity. As of this printing, it probably will not be a BonFIRE but the Senior class is planning an alternative activity if FIRE isn’t possible. The evening activity won’t start until 7:30 so that the Cross Country runners (who will be competing in Gering that afternoon) can get back to enjoy the festivities. The Senior Class will host a Hot Dog BBQ at 6:30 p.m. for $3 a plate (hot dog, chips, drink, cookie or bar).

On Saturday evening, the Student Council will hold the Homecoming Dance. The Dance will be held in the school cafeteria from 8-12PM. The cost for the dance will be $2 per person and $3 per couple. Ineligibility will count and once a student leaves the dance they will not be allowed to return.

If you have any questions, please don’t hesitate to call the school and ask for Mrs. Houser.

New contest! The kitchen is looking for new menu ideas.  There will be a suggestion box located in the cafeteria on top of the microwave oven.  Students and staff are encouraged to write down their menu suggestions along with recipes to place in this box.  You can also email your suggestions to wendy.palmer@panesu.org.  Each time your menu suggestion is used, your meal is free!