The live stream recording of Hay Springs Public School’s Veterans Day program is now available to watch in case you missed it live.  Please click the link below to view the video…please note that the program itself doesn’t start until about 5 minutes from the beginning of the stream.  A very special thank you to Thomas Slaughter of Hermosa, South Dakota for speaking at our program and to the Hay Springs High School band for playing(even though we couldn’t stream it)!

-The Veteran’s Day program will be held on Monday, November 11th 2019 at 10:30 AM. Mr. Keith Kearns and Ira McKillip will be the guest speakers. Veterans are invited to stay for lunch following the program.

-Picture retakes have been scheduled for November 12th.

-The Hay Springs High School One Act Play team will be performing “Citizen’s Arrest” by Bobby Keniston. There will be two public performances TBA and the team will be competing at PANCO in Edgemont on Friday, November 22nd. Districts will be held in early December, TBA.

Nebraska Beef to Hot Lunch Program is a reality at Hay Springs Public School.  The students, staff, administration and the Board of Education are extremely excited about the fact that we will be serving locally grown beef in our school lunch program.  This program is a great way to support the health and nutrition of the student attending Hay Springs School.  Today, we had a “Beef to Table Kick-off” event prior to our first home football and volleyball games to be held on Friday, September 7th.  Parents and patrons were invited to join us for the noon meal.

We are so grateful to those individuals on the Board of Education and local beef producers that have been instrumental in researching and developing this very important program.  Their dedication towards getting locally produced beef on the table for our students is greatly appreciated.  A huge thanks go to those who have contributed to the success of our initial stage of this program.  Those include Sheridan Livestock Market and Judd Hoos for donating the first two beef animals, Security First Bank for paying for the processing, BNSF Railroad and Russ and Sue Lechtenberg for donating freezers, Greg Heiting and Brian Forney for transporting the animals to slaughter and processed beef back to the school, and to Sandhill’s State Bank for their monetary donation.  KDK Meats at Bridgeport, Nebraska, a USDA inspected packing plant is where the beef was process and KDK donated the cost of the inspection and testing for the animals and processing.

Local beef producers are stepping up in a big way to provide nutritious beef to our students.  We currently have two additional animals donated for processing later in the year but will need additional animals as we continue this program.  If you are interested in supporting this program in any manner, please contact the Hay Springs School administrative office or any of our Board of Education members. 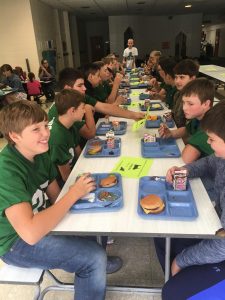 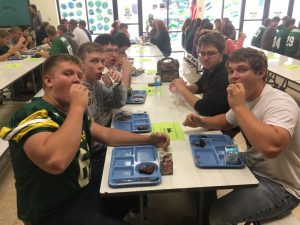 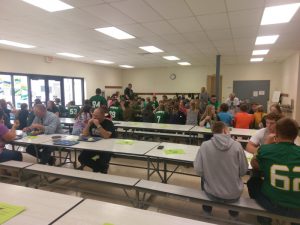 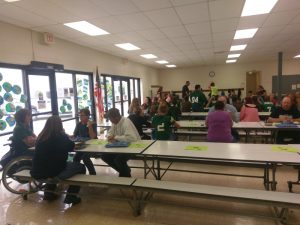 The 2018 Elders’ Wisdom honorees were Lloyd and Mary Ann Hunzeker.  You can watch the video of the program below!

March 1st was the second Family Movie Night.  This time featuring “The Lorax” based on the book by Dr. Seuss.  After the movie parents and students gathered in the cafeteria for Lorax activities and treats. They made Lorax wraps for milk cartons then planted marigold seeds. There were pictures to color and words games for all ages. 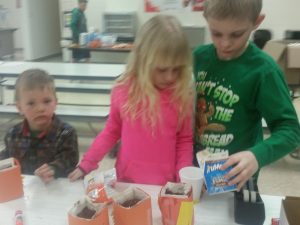 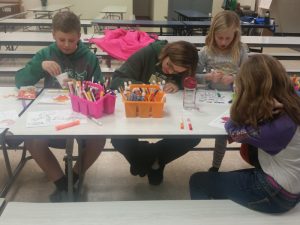 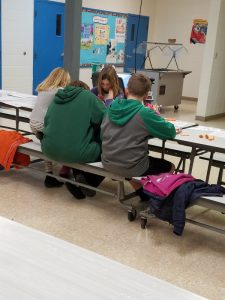 Our Team competed in Sidney, NE on January 20th with 16 other teams who battled the clock while remembering Gracious Professionalism. Seven of those 16 teams were successful. Our Team was invited to join other teams at The Nebraska Robotics Expo February, 17th, 2018 at the Strategic Air Command Aerospace Museum in Ashland, NE. We will be working the concessions stand this coming Tuesday, January 30th, at the basketball games beginning at 3:00 PM to defray the cost of our trip. Please consider supporting us while you enjoy great Mexican Food! 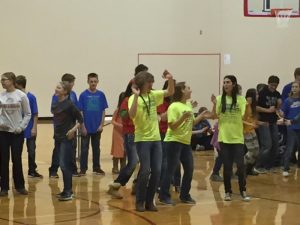 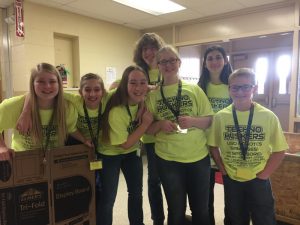 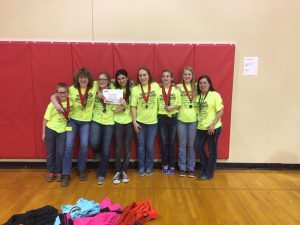 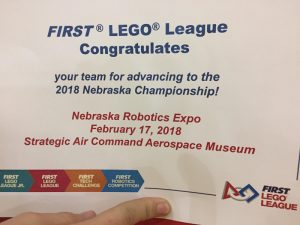 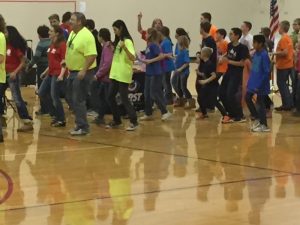 On Saturday, January 20, 2018, the Hay Springs Jr. Robotics Team made their official debut in Sidney, NE. The team, launched in October 2017, has been following the FIRST LEGO League Jr. Curriculum. This program, in conjunction with 4-H, introduces kids ages 6-10 to STEM concepts. This year’s theme was AQUA ADVENTURE. The teams learned Core Values of the program, conducted research, utilized Engineering Notebooks, voted on team names, selected real-world water problems to tackle, engineered and built LEGO models to solve their problems, programmed moving parts to include in their models, and managed to have fun in the process! The teams compiled their hard work and ideas on “Show Me” Posters which were presented along with their LEGO builds at the showcase in Sidney.

Hay Springs had three of the seven teams participating in the Junior Division. It was remarkable to see our school represented in such an impressive manner. This was the first expo experience for all involved. The kids did an amazing job presenting and answering the judge’s questions. The parents and family members that made the trip completed this awesome positive experience. The dedication and support of so many individuals made this “experiment” possible!

The “RoboKids” team consisted of Riggen Binger, Jacob Dorshorst, Cora Summers and Catherine Two Bulls. The “RoboHawks” team consisted of Luke Edwards, Brayden Heiting, Cade McKillip and Easton Mintken. The “Smartie Hawks” team consisted of Emma Albrecht, Mason Albrecht, Megan Anderson, Will Gaswick and Devyn Young. The teams were coached by Melissa Mracek and Erika Gaswick. Many thanks to Miriam Kearns and the “big” robotics team for visiting with us and showing us what our future may hold. Thanks also to Aaron Taylor for speaking to our group about our water and it’s journey. 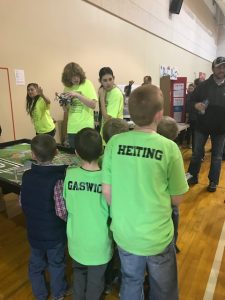 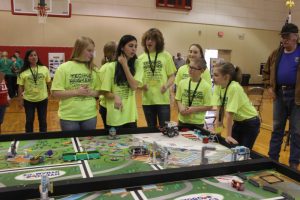 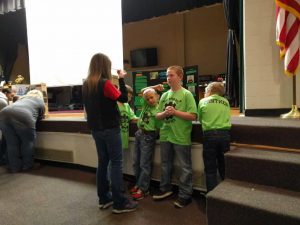 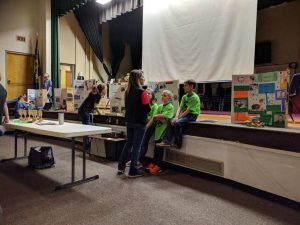 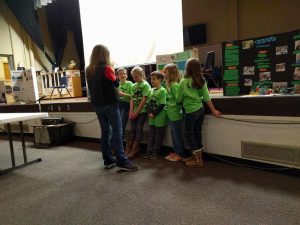 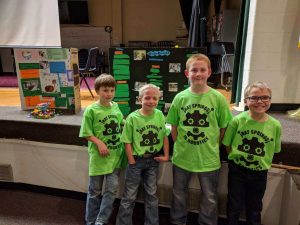 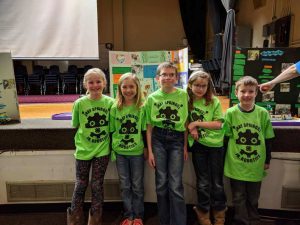 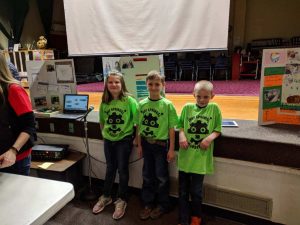 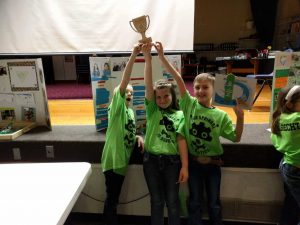 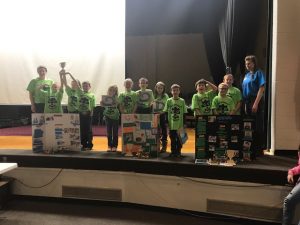