The JR High Quiz Bowl competition in Morrill (March 18, 2022) has been canceled.

Quiz Bowl Season is here. This year we will be the host school for the Panhandle Conference Tournament on Friday, March 20th. Both High School and Middle Level will be competing in the competition. High School will have two teams and the Middle Level will have one team. The students will be preparing to compete with practices over the next two months.

However, with six teams in the conference and nine games going on at one time we will need many others to make this tournament a success. If you are willing to help as a reader, timer, or scorer contact Brad Bounous or Carole Matthews at school. 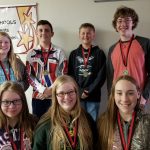 The Eighth grade quiz bowl team and the gold medals they were awarded for their performance at the Chadron Middle School Quiz Bowl competition.

The Chadron meet has grown to include 12 schools: Alliance, Bridgeport, Chadron, Crawford, Gering, Gordon/Rushville, Hay Springs, Hemingford, Lusk, Mitchell, Scottsbluff, and Sidney. The competition is tough as many of the larger school compete in several meets over the year. The two teams with the highest total points for three rounds go to the Finals to determine the winner.

Both Hay Springs teams performed well answering questions on a variety of topics including: English, Math, Science, Social Studies, and Fine Arts. When we finished the day, both teams had placed third. However, the next day we were notified that due to an error, the eighth grade team should have been in the finals and would be awarded gold medals. Congratulations to the Eighth Grade!

Kaelob Marx and Hunter Letcher competed for the Panco All Conference team and both made the team. 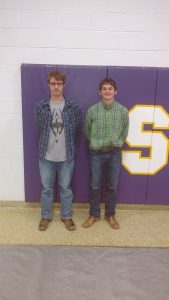 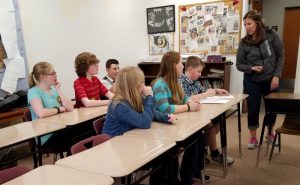 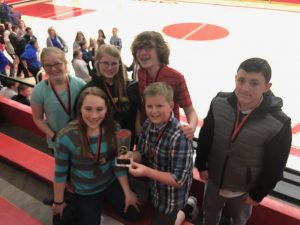