On Wednesday December 9th the District XII Leadership Skills Events were held virtually as Chadron State College was unable to host the event as in the past do to COVID. In the individual events Hay Springs had two individuals qualify for state competition. Abigail Russell received first Purple and was a State Qualifier in the Creed Speaking contest and RyLee Wolken received second purple in Senior Public Speaking and qualified to compete at state in April. Other individual award winners were Jaiden Anderson finishing in third place and receiving the 1st Blue award and is the alternate to State in Cooperative Speaking. Hannah Hoos received fifth place and a Blue award in the Employment Skills job interview competition and Adrianna Haffner received a red award in the Creed Speaking competition.

In the “Senior Parliamentary Law Team” competition our sophomore team finished with a Blue Award. team members were Braydon Binger, Molly Spicer, Jett Rasmussen, Colter Meeks, Breely Smith, and Hally Johnson. Team alternates ere Mia Skinner & Augustus Scott. Our Junior and Senior “Parliamentary Law Team” received a Red Award and consisted of Jaiden Anderson, Bailey Scherbarth, Laney Smith, Logan DeCoste, Jazlyn Smith, and Elissa Reina.
Congratulations to all of these students the to the very positive way they represented our school and community in these District Leadership Skills Events.
We would also like to thank Mr. Hagge for supporting our FFA Chapter by volunteering his time to serve as a judge for the day’s events and huge thank you to Mr. Larel Reimann for assisting with the technology and set up of these events. 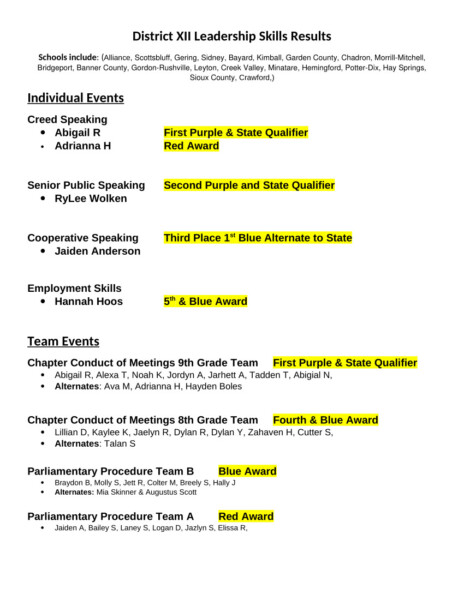