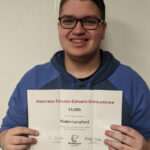 Senior Kaden Langford has received a $5000 eSports scholarship to Hastings College in Hastings, NE.  Kaden is the third year captain of the Hay Springs eSports team and was instrumental in the creation of the team.  During the 2022 Fall season, Kaden qualified for the Nebraska Schools eSports Association State Championship and came home with a 6th place medal in the “Super Smash Brothers Ultimate” tournament.  When asked for a comment, Kaden responded “This is really, really awesome!”  Currently, Kaden and his “Mario Kart” teammates are preparing themselves for the 2022-2023 Winter Season Playoff which begin the week of January 16th.